Countries that are free of religion are the most socially advanced, research data shows

The science is in, and God is not the answer

Yesterday the international polling organisation WIN/Gallup released the results of a massive new survey into religion worldwide (here’s their press release). You’ve probably seen the news reports, mostly talking about which countries have the most (or fewest) religious people, and speculating what that might mean.

Some other important data come out just last week – the latest update of the Social Progress Index.This also is a mammoth undertaking, painstakingly assessing the nations of the world against a battery of benchmarks divided into three categories: “Basic Human Needs”, “Foundations of Wellbeing” (health and basic education), and “Opportunity” – personal rights, freedom, tolerance and advanced education.

So here’s the question. Are the two correlated in some way – and if so, how? I downloaded the data to find out.

I divided these 59 countries into thirds according to how ‘non-religious’ they are. In the top third, most people (60%) were not religious (The Wa-Po has a graphic listing 17 of them).

This trend was apparent across all three categories. Non-religious nations were better at meeting basic human needs and providing the foundations o 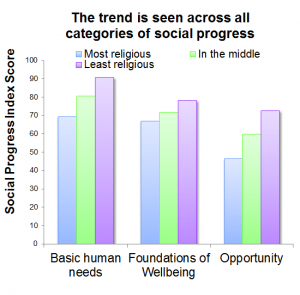 For those who care about such things, they were also linearly correlated, with an r2 of 0.4.

This analysis is brand new, never been seen before. But the general message – that regions with less religion are generally nicer places to live – is fairly well established now.

Back in 2009 I showed the less religious countries were also more peaceful, and research since then has shown that they are  more democratic, have less corruption, more telephones, do better at science, have less inequality and other problems, and are generally just less dysfunctional and have better quality of life.

Now, there’s all sorts of possible explanations for this. I’ve long maintained that people turn to religion when their environment is stressful or uncertain, and that this explains why some countries are more religious than others.

However, it is also true that other factors, like exposure to diverse world views, are important. And, thinking about the Social Progress Index, you can easily imagine that having a religious majority could have a bad effect on personal rights, freedom and tolerance.

But whatever the explanation, there’s one clear take home, and it’s this. We really do not need to worry losing religion will cause society to crumble, as many claim. The evidence is overwhelming that the least religious societies do rather well.

Explained: Why Bushiri is asking for contributions from members

Harare - Zimbabwe's military has deployed its most elite disaster management personnel and units across all of Zimbabwe's ports of entry to help fight the...
Read more

Musina - At least 20 passengers travelling into Zimbabwe from South Africa have been quarantined at Beitbridge Border Post after a Malawian national onboard a...
Read more

Cape Town - British Airways grounded a Boeing 747 on Tuesday night after it received an alert that a woman who had tested positive for...
Read more

Chamisa, Mnangagwa fans fighting for Boris Johnson’s love – ‘The Boris is mine’

POLICE have arrested a 32-year-old man on charges of stealing tar worth $94 000 that was meant for the Harare-Masvingo Highway dualisation. National Police spokesperson,...
Read more
Khuluma Afrika

THE opposition MDC says it is working with some of the ruling Zanu PF party legislators to impeach President Emmerson Mnangagwa, a legislator has...
Read more
Khuluma Afrika

Former Mashonaland East Provincial Affairs minister, Ambrose Mutinhiri will see his tractors go under the hammer to settle a $54 000 debt with the...
Read more

Stay on op - Ge the daily news in your inbox